Eleni’s passion for cooking was ignited as a young girl watching her mother and her nine aunts, all sisters, cooking together and preparing family feasts. Eleni witnessed the joy of cooking, companionship and collective creativity, as she watched these women working together. The food they then shared was infused with all these memories; memories that remain indelible for Eleni.

Eleni learned her sheftalies recipe in the same way. She became friends with Vasiliki when she came to Melbourne for post-graduate studies. Vasiliki and Eleni bonded instantly over their shared Cypriot heritage and their love of cooking. They would often cook all day and then invite their friends over to feast on the food they had prepared and celebrate their friendship, well into the night, with music and dance.

Vasiliki taught Eleni her family’s sheftalies recipe and now Eleni has made this recipe so many times, it has become her signature recipe too. Eleni’s Sheftalies are made with cinnamon-spiced pork mince; a generous amount of fresh parsley; brown onions; dried mint and seasoning, and then wrapped in caul fat, before being barbecued over hot charcoals. The fat in the caul fat renders out, making the sheftalies juicy and delicious. They are usually made for special celebrations and get togethers. They take a little preparation to make, but if the effort of making them is shared, then the family, friendship and feasting rewards are enormous! 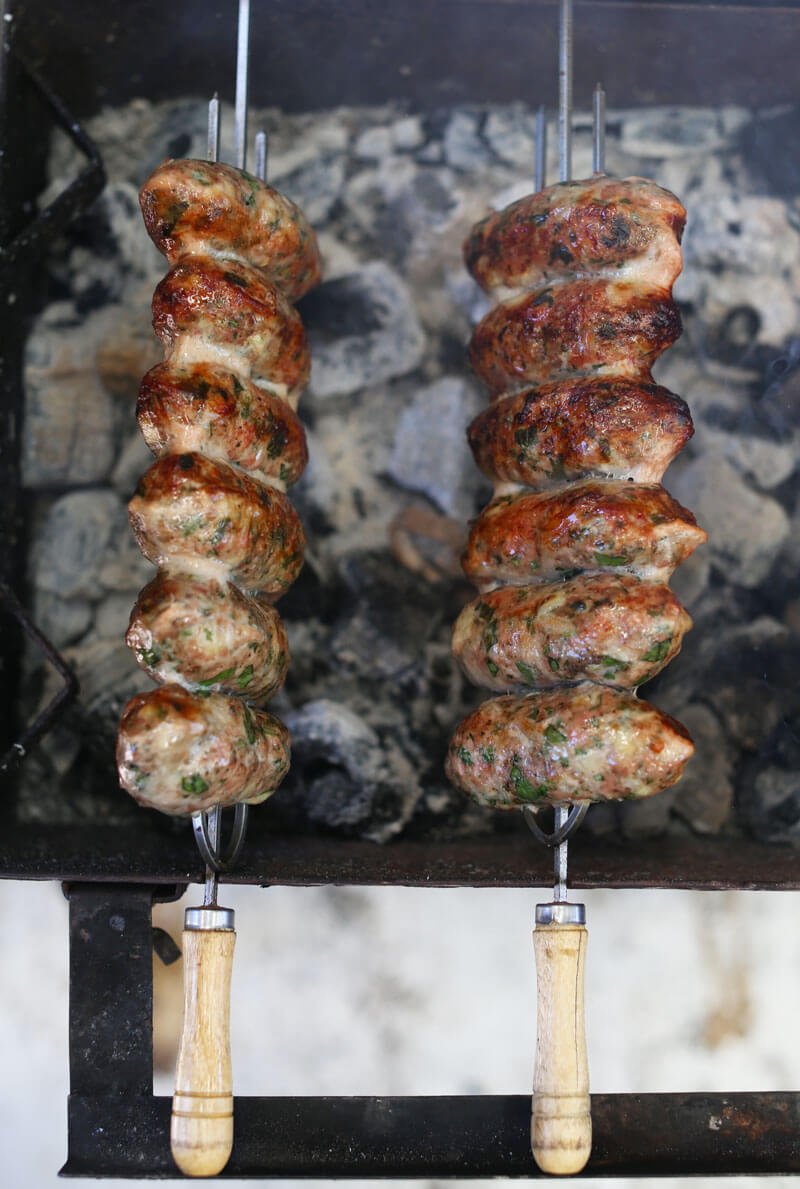 Eleni’s Sheftalies are made with cinnamon-spiced pork mince; a generous amount of fresh parsley; brown onions; dried mint and seasoning, and then wrapped well in caul fat, before being barbecued over hot charcoals. The fat in the caul fat renders out, making the sheftalies juicy and delicious.

They can be eaten Cypriot style in a Cypriot pita pocket filled with a dry salad of finely diced tomatoes, cucumbers, onions and parsley; pickled vegetables; tzatziki and a generous squeeze of lemon juice or as is with a salad, roast potatoes and a dip!

• The caul fat generally needs to be ordered ahead from your butcher. 1kg of caul fat can wrap approximately 5kg of mince meat filling. It’s better to have a little extra caul fat than required, just in case there are segments that have holes in them or are too thick to be used
• If you purchase frozen caul fat, defrost it overnight in your fridge. Whatever defrosted caul fat isn’t used making the sheftalies, should be discarded and not refrozen. If you use fresh caul fat, then any remaining caul fat can be frozen.
• Do not use segments of caul fat that have holes in them or have very thick fat veining, as the fat may not render fully during the barbecuing
• Prepare the charcoal barbecue by adding kindling (plenty of newspaper and dry wood) to the base of the barbecue. Place plenty of charcoal on a wire rack and rest this on top of the kindling. Do this just before making the mince meat mixture. Light the barbecue just as you begin to prepare the sheftalies, that way the charcoals will have reached the orange-white stage and be ready to use for barbecuing. This ideally will coincide with the end of the sheftalies preparation
• The onion and parsley need to be chopped finely enough to combine easily with the mince meat and to ensure there are no large chunks of either, when biting into the sheftalies.
• You may choose to brown and cool the onions before adding them to the mince meat, for a milder and sweeter onion flavour
• If you are using barbecue forks to barbecue the sheftalies, the sheftalies need to be long enough to pass through all the tines of your barbecue forks, but not too long as they may fall apart during the barbecuing
• If two people are making the sheftalies, one can roll the sausages, while the other wraps them in the caul fat
• If the sheftalies are not barbecued immediately, place them on a lined tray, cover them with foil or cling wrap and refrigerate them
• If you prefer, you can cook the sheftalies on a grill pan on medium-high heat, cooking each side for 10 minutes or so
• The lovely mince meat mixture can easily be shaped into meatballs (without the use of the caul fat) and shallow fried or baked and served with a Greek Salad, Rizoni-Rice and KO’s Best Ever Tzatziki