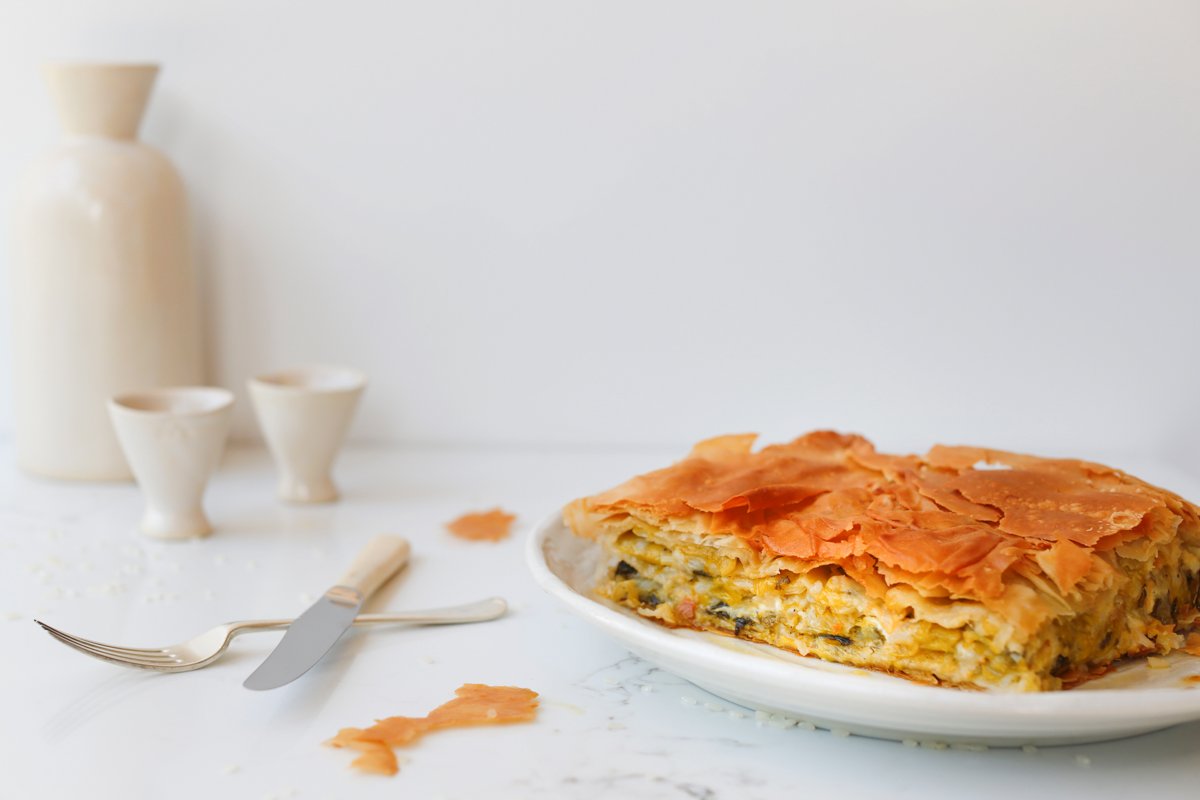 When I was 22 years of age, I went on an extended back-packing trip around the world. While I was away, Eugene (my mostly good man) asked my mum to teach him how to make fillo pasty. He was 23 years of age and already concerned that this skill would be lost to future generations due to changing priorities and shifting life-styles. When I returned from my trip and heard this, I decided I needed to learn too. I am actually not a competitive person, but it didn’t feel right that I hadn’t taken the time to learn this skill from my mother and that it really was my responsibility to maintain this skill and one day pass it on to the next generation.

Since that time 30 years ago, I have made mostly one type of pita – prasopita – leek pie. It really is my favourite. Leeks are so sweet and juicy when cooked in olive oil and their flavour is so morish!! I can’t get enough of them.

The video created for this recipe gives you step-by-step instructions on how to make this delicious pita, including how to roll your own fillo pastry. Rolling your own fillo pastry is a skill that can be developed with patience and perseverance. Your first two or three sheets of fillo may be a little holy and odd shaped, but before you know it, you will understand how much pressure you need to apply to the fillo to stretch it out and when it needs to be dusted with extra flour, because it’s getting too tacky to work with. Layer by layer your pita will come to life, and the joy and satisfaction you experience when you sit down with friends and family to share the fruits of your labour, will be enormous.

The day Lucia filmed me making the prasopita, Ilyana was at home, and without discussion or warning, she joined me in the kitchen and had a go at making fillo. I hope you will be as curious and courageous as her and have a go too!

To see the prasopita made as scrunchy logs, watch Crystal @thehungrygreekgirl_ here. Use less EVOO when cooking the leeks and rice (approximately 200-250ml). DON’T add the feta and eggs into the pot with the leeks and rice – layer them over the leek/rice filling once you have placed it onto the fillo and finish with a drizzle of oil over the layered filling! Watch the link, you’ll understand!

For the fillo dough...

For the flour-cornflour mixture (used to dust the fillo with as you roll it out)...