Christina was born on October 12, 1948 on the eastern seaside of the city of Kalamata. Although her mother gave birth to 11 children, only seven survived beyond early childhood, and she was the second last of these. At 20 years of age, she migrated to Australia, upon the invitation from her older sister and brother, who had previously migrated to Melbourne. She lived with her siblings in Armadale for three years before marrying her husband Bill (Vasilis) and moving to Malvern. Christina and Bill had two daughters and then ten years after their second daughter, they welcomed a son. They have five grandchildren from their daughters.

Christina studied design and tailoring in Greece, for five years, from the age of 13. With Christina’s limited English, she was not able to work as a clothing designer in Melbourne. Instead she found work in the clothing industry, working efficiently and productively on garment production lines. Once she had her first child, she then began working from home and continued to work in this capacity for seven years. With Chinese migration to Australia and the willingness of the new immigrants to accept reduced wages, it became difficult to earn a reasonable living and so she took a job, making car parts at BBR from 3pm to 2am, seven days a week.

Christina first began cooking when she married; she found she had a disposition for cooking and was quite creative. She is also an avid gardener, growing most of the fruits and vegetables she uses in her cooking. She harvests produce from her garden and then in a tiny second kitchen, in her basement, she makes all wonder of Greek delights. Greeks show their love and appreciation for their family and friends by preparing and sharing their food, and Christina is a shining example of this.

In 1983, a new family came to live across the road from Christina and her family – the Brumleys, including their young adult daughter Jacqui. A friendship initially formed between Christina’s family and Jacqui’s family, through Bill and Jacqui’s father, John. The two men became ‘garage buddies,’ as they helped each other on weekend projects in their garages. As they worked, they also enjoyed a beer or two and Christina took it upon herself to make sure they were well fed too.

The friendship between the families strengthened when Christina gave birth to her third child, Harry. Jacqui’s mother, Lillian, visited Christina and offered a gift of congratulations. It was a small, wooden, pushcart filled with coloured, wooden blocks. Christina truly appreciated this gesture and in return showed her gratitude with endless offerings of her delicious food… for years to come. Thirty-two years on, Christina has held onto this precious gift and Kali Orexi has used it in the styling of one of the photographs for Christina’s Vegetarian Moussaka.

Although Jacqui’s family eventually moved away, Jacqui continued to nurture her friendship with Christina and they remain close to this day. Jacqui visits Christina regularly – even for just a quick drop in to say ‘hello.’ Christina never lets Jacqui leave empty handed – always sending her off with a plate of food, including her Vegetarian Moussaka (adapted from her traditional meat-based moussaka) – which Jacqui and her husband, Shimon, who are both vegetarians, enjoy enormously.

In 2011 Christina became unwell with oral cancer. She endured and recovered from complex reconstructive oral surgery, radiation and chemotherapy. Throughout her battle with this illness, she has shown an indomitable strength and courage; she has held onto her life and all the elements she values – sewing; gardening; cooking; and feeding her family and her loved ones.

Christina dreams of seeing her son marry his fiancée and also holding his children. We truly hope she realises her dreams. 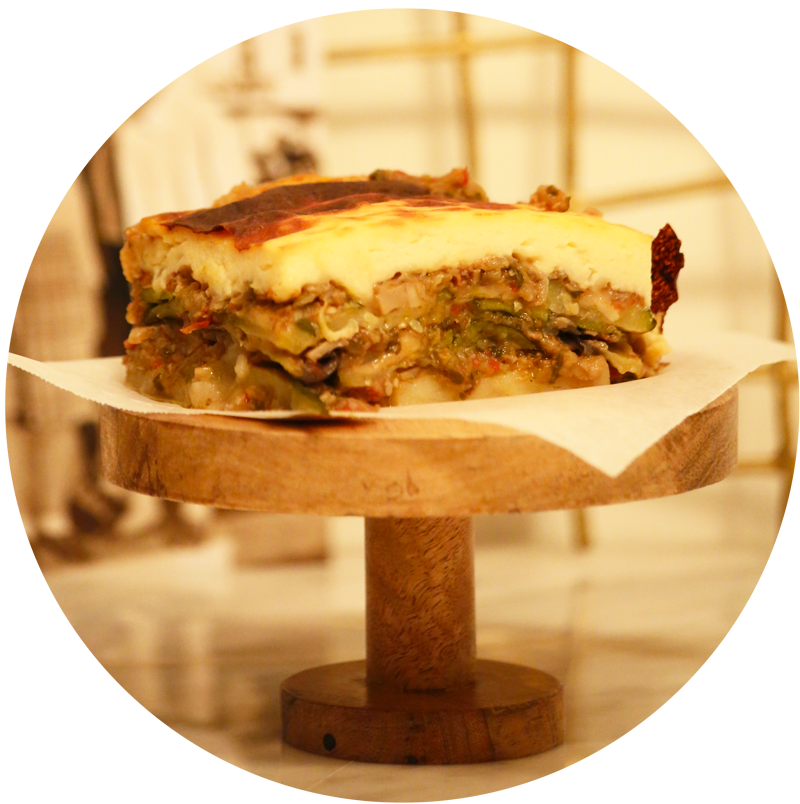